In addition to the circa 1822 Brownson House and the 19th century Wilson Barn, there is the one room Trap Falls School, a carriage barn housing a collection of horse drawn vehicles, a corncrib, and an outhouse. 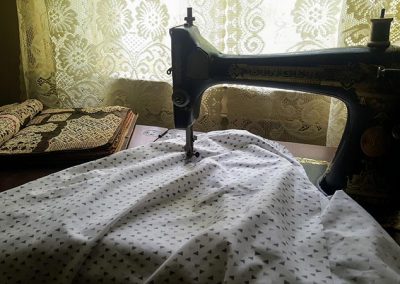 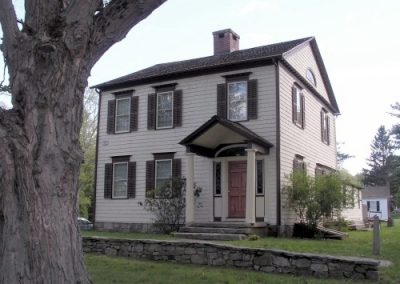 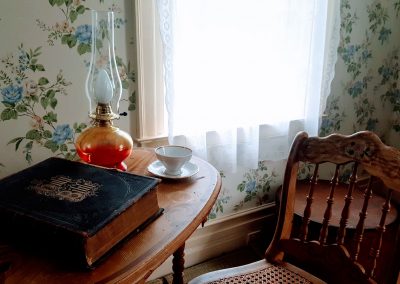 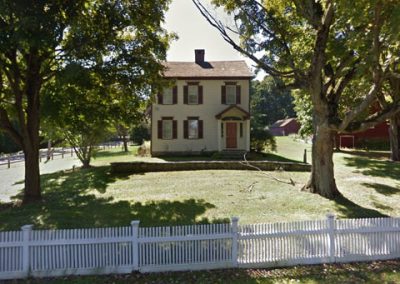 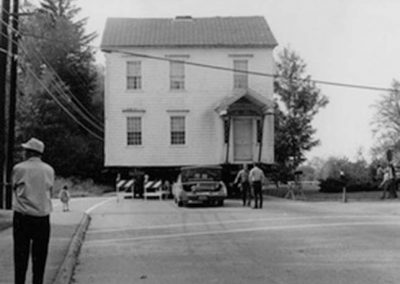 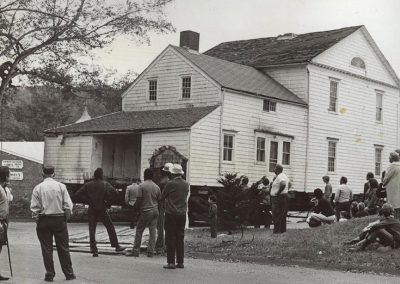 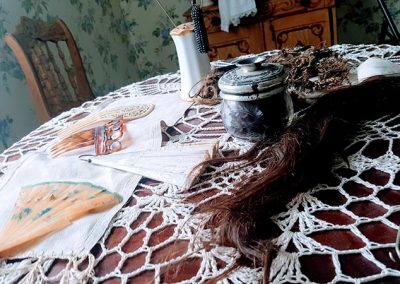 The Brownson House is a two story, three bay structure that incorporates stylistic elements of late Federal and early Greek Revival architecture. An architectural assessment conducted in 2002 determined that the house was built between 1820 and 1825.

Hezekiah Marks, for whom the house was built, was a respected member of the community and served as a Justice of the Peace and a representative to the Connecticut General Assembly. His widow and children sold the property to the Bennett family in 1835.

The Brownson family purchased the house in 1866 from the Bennett’s. In 1904, Harry Brownson married Gertrude Buckingham and they celebrated over sixty-two years of marriage and were the last of the family who lived in the house for over one hundred years.

In 1970, the historic Brownson House, then located at the corner of Shelton Avenue and Old Shelton Road, was threatened by development. The house had been owned by the Brownson family for over 100 years and most recently been occupied by Harry and Gertrude Brownson, farmers and entrepreneurs. The house was sold to the newly established Historical Society for $1.00 under the condition that it be moved. Wisner and Dorothy Wilson offered 1 1/4 acres of their property on Ripton Road to the Society and with the relocation of the Brownson house in 1971, the Shelton History Center was established.

After several years of research and exploration, Shelton Historical Society transformed the Brownson House to depict the year 1913, when Harry and Gertrude Brownson lived there and farmed their land. While they were not influential on the national stage, the Brownsons were integral members of their community and the interpretation of a middle-class farming family in the early years of the 20th century is rare in Connecticut’s historic houses that commonly emphasize the colonial era, high-style wealth, or a famous individual.

Before World War I, Huntington was primarily an agricultural community where little had changed since the Civil War. In contrast to the rural surroundings was the riverfront Borough of Shelton, an industrial powerhouse at its apex. With the 1913 interpretation, the Society explores the economies and symbiotic relationships of rural and industrial Connecticut, life at the turn of the 20th century, the Industrial Revolution, immigration, women’s suffrage, growth of labor unions, and the birth of the modern age through the eyes of the Brownsons. This interpretation is based on a wealth of documentary, photographic, and material culture collections that are contained in the Society’s archives concerning the family and the period in history.

Trap Falls School was built in 1872 to replace an earlier structure. It was located near Huntington Street and Trap Falls Reservoir, which did not exist when the school was built. Eventually, the building was acquired by Bridgeport Hydraulic Company and used as a storage shed before being donated to the Shelton Historical Society in 1971 and moved to the present Shelton History Center complex.

The Trap Falls School tells the story of early 20th-century education in Shelton. It is a one-room school serving school-age children to grade 8. All students bought their own books. Usually, the schoolbooks were handed down in the family. Younger children used slate and slate pencils to write. Older children used pencils and pens. The materials were provided by the students. Paper was also brought by the students. Subjects taught were reading, writing, arithmetic, spelling, and geography, and history for the older students. Subjects were taught through repetition and rote memorization. The teacher instructed one grade while the other grades worked on assignments. No homework was given out. Each school day started with opening exercises: a reading from the Bible, salute of the flag, a prayer, followed by the singing of a song.

Students either walked to school or were transported in a carry-all, a horse-drawn enclosed wagon. Contracts were awarded to local men to provide this transportation. A restored carry-all or “school bus” is in the carriage barn on the Shelton History Center property. It was restored from an original carry-all used in Shelton. The carriage barn was built in 2007 and houses various vehicles used in the late 1800’s and early 20th century. These include a horse-drawn sleigh and a carriage. In addition, there are several other interesting implements from the last century such as an apple cider press, a canoe, and a 14’ toboggan. 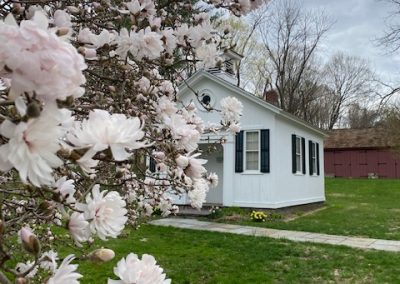 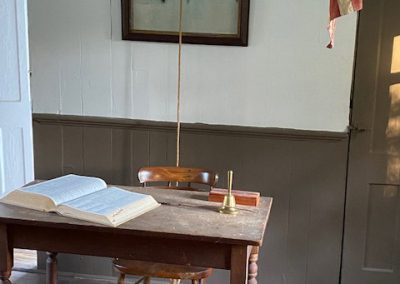 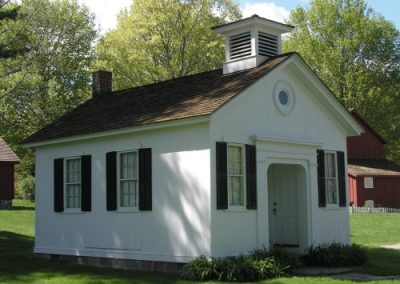 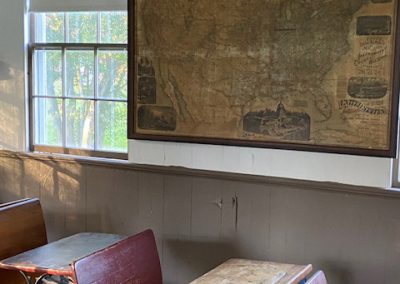 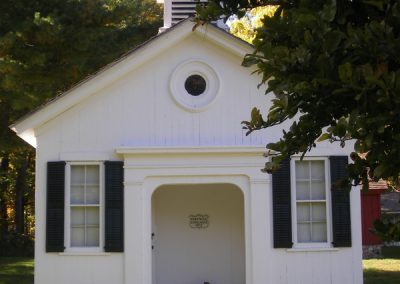 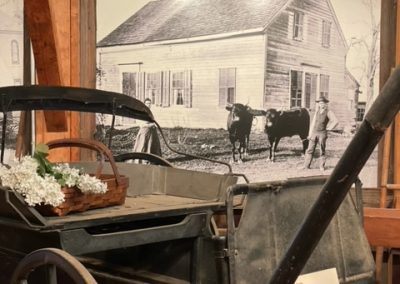 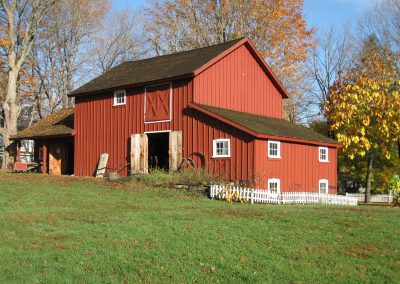 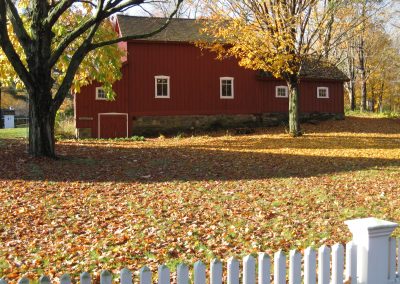 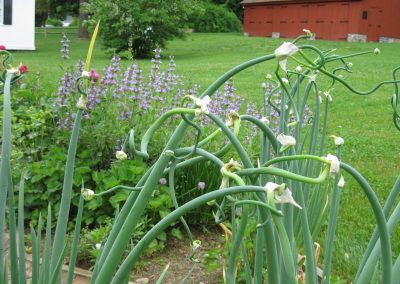 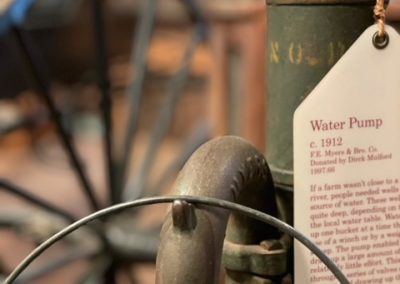 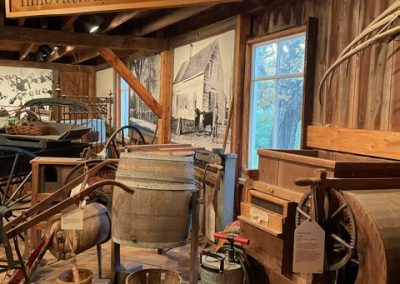 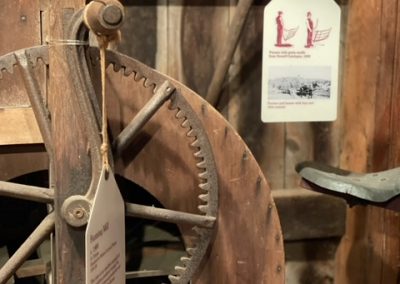 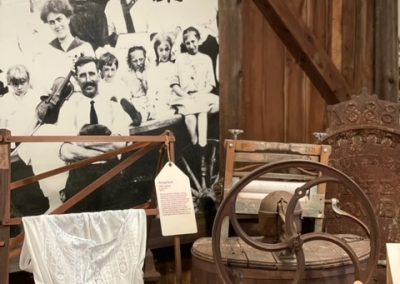 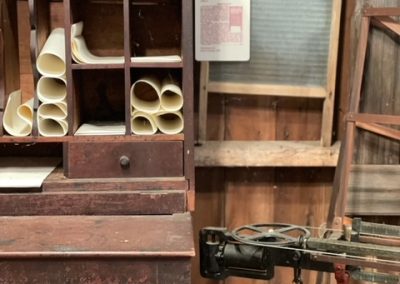 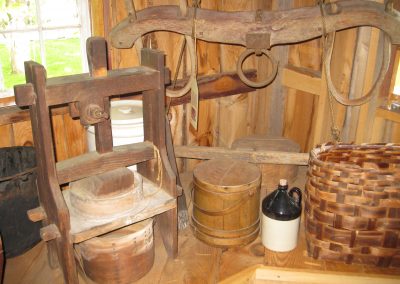 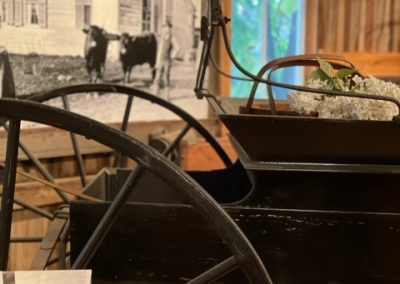 The Wilson Barn, original to the site, was once part of a farm owned by Wisner and Dorothy Wilson, who donated the land that is now Shelton History Center. Believed to be built circa 1860, it was in derelict condition when it was reconstructed in 1997 to house our award-winning permanent exhibit, Three Centuries of Shelton—From Farming to Industry and Beyond.

The exhibit outlines the development of the community.  In the late 1600s, the area was the territory of the Paugussett tribe when European settlers from Stratford began making their way north into the area. Later industries took advantage of the water power along the Housatonic River and its canal; some of the myriad products manufactured in Shelton are displayed. The exhibit also demonstrates Shelton’s evolution into the late 20th century. It is divided into sections, each illustrated by the artifacts that represent the work and lifestyles of the people who called Shelton home during the time periods represented.

Handmade wooden tools such as an ox yoke hanging in the Early Farming area, for example, remind us that difficult physical labor and the vagaries of the New England climate and soil had to be overcome by everyone who wanted to eat.  Innovations in Farming introduces simple machines inspired by the agricultural revolution of the mid-1800s, while Life in Shelton in the early 1900s was influenced by industries and waves of immigrants who were sweeping in to work in newly built factories along the Housatonic River or on established farms.

A thorough structural description of the Wilson Barn can be found at https://connecticutbarns.org/find/details/id-2493